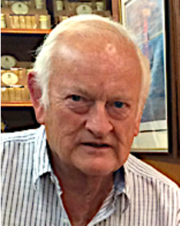 Pip Burley was born in Croydon where he attended Whitgift School. During a career embracing music, publishing, advertising, theatre and television, Pip has performed in, written, produced, musically directed and directed a variety of works on television and in the theatre.

Through his company, Excelsior, Pip has devised and produced The Darling Buds of May, starring David Jason and Catherine Zeta-Jones, and A Touch of Frost created for David Jason. He has also produced My Uncle Silas with Albert Finney and Pride of Africa, starring Robert Powell.

In theatre, he has produced West Side Story at The Fairfield Halls, and produced and directed Guys and Dolls for the National Trust, for whom he was Artistic Director at Polesden Lacey for four years. He has directed Kismet and The Slipper and the Rose, which he also adapted for the stage and is now performed all over the world. For the theatre, he has written and directed No Exit for Students, Don’t Mess With the Curtain Cords! and Viva la Costa!

Pip began life as a keyboard player with the advent of rock n’roll and then with the big bands of the 60’s including Joe Loss, Cyril Stapleton, Ken Mackintosh, Sydney Lipton and Ray McVay.  He has composed, arranged and recorded music for commercials, theatre, film and television and, in 1990, won the Ivor Novello Award for best television theme music for The Darling Buds of May.

He has been a featured lecturer onboard The Queen Elizabeth, The Queen Victoria and Sapphire Princess presenting his series of lectures entitled “The Golden Age of Song”, celebrating the lives and work of Jerome Kern, Irving Berlin, Cole Porter, George Gershwin, Richard Rogers and Hoagey Carmichael. He is an accredited lecturer of the Arts Society.

Alongside the above, Pip founded a publishing, advertising and design group, which he ran as Chairman and CEO throughout the 70s, 80s and early 90s, serving a wide variety of clients including Toyota, Book Club Associates and The Financial Times, as well as working internationally, especially in the leisure industries.

Pip was Chief Barker of the Variety Club in 1999, the charity’s 50th Anniversary, and has been Chairman of Variety Golf (formerly the Variety Club Golf Society) since 2019. He was President of the Whitgiftian Association in 2017-8 and now serves on the committee of the Old Whitgiftian Golf Society which he captained 2007/8 and is currently President. He was Chair of Governors of the Quest Academy in Croydon for five years between 2012 and 2017.

He has written two books: Views from the Back of a Taxi (published in 2017 under the pseudonym of Philip Walsh) and Briefest Encounters, a semi-autobiography published in 2016. He has also written a book of poetry Poems, Limericks, Lyrics & Odes (limited edition, 2012).

Pip is married with three daughters and eight grandchildren, and lives in Headley, Surrey.