In Briefest Encounters (published 2016), pianist, composer, publisher, ad-man, TV producer and businessman, Pip Burley, reflects upon some of the people he has met and worked with during a jack-of-all-trades career – including the stars of The Darling Buds of May and A Touch of Frost.

Mostly he describes these experiences with affection, embracing the inevitable highs and lows as all part of the illusory and sometimes duplicitous world of the media – and only occasionally dwelling on the odd unpleasantness he has met with from time to time.

As well as being a chronicle of some of the best-known celebrities of a generation, Briefest Encounters is a fascinating insight into the celebrity mindset and what it is like to be behind the scenes when the magic dust of showbusiness is being conjured up and sprinkled around.

Please click the front cover image to purchase via Amazon. 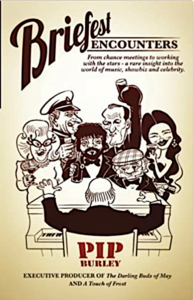